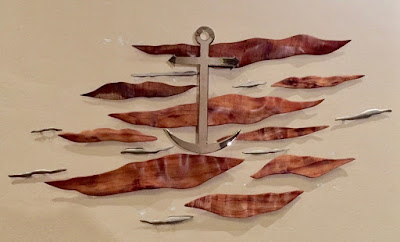 When a Navy ship passes the ARIZONA Memorial, that ship renders honors as if passing another ship. The bosun of the watch pipes attention to port or starboard, as the case may be, and then everyone on deck on that side of the ship comes to attention and, at the designated moment, renders a hand salute to the ARIZONA. At first, rendering honors to a sunken ship seemed strange. Over time, I realized that the practice honored not only the one thousand one hundred and seventy-seven sailors and Marines killed in the sinking of the ARIZONA but also all who died in the attack on the seventh of December 1941.


The reading from Ecclesiasticus (44:1-15) reminds us to honor not only the famous but also the unknown yet numerous ordinary, godly Israelites whose names are lost to history. This cross, constructed from metal taken from the ARIZONA’s hull, calls us to pause for a moment to honor by remembering with a brief prayer both for those who died on December 7, 1941 and the people who found their spiritual home at St George’s, for which the cross was originally made.


I have also attended reenlistment ceremonies aboard the ARIZONA, ceremonies in which a sailor committed him or herself to serving in the Navy for another three to six years. Sailors choosing to celebrate an important career milestone aboard a memorial to a ship sunk in a tragic defeat, a site hallowed by the entombment of over one thousand sailors and Marines, may seem incongruous. Yet, as today’s first reading clearly implies, we remember those who died for causes and values we hold dear not only to honor them but also in the hope that we shall have the courage, perseverance, and strength to emulate their example.


Jesus was the human face of God. We tell his story to encourage ourselves and others to follow his example. Similarly, when we talk story and personalize our memories, drawing inspiration from a specific person, we more easily avoid the temptation of remembering without genuinely honoring their memory by following their example.


For example, one such person was Ken Perkins, whom you also may have been privileged to know and whose life repeatedly intersected with what this memorial symbolizes. Ken was ordained priest here in 1933. After filling various positions, including at St. Andrew’s, he served as a Navy chaplain from 1941 to 1962. Then he served as rector of St. George’s Church for a decade. In retirement, Ken was for many years the diocesan historian. He died in 2001. There were some memorable moments in his ministry: watching the battle of Midway, praying at the dedication of the National Memorial Cemetery of the Pacific at Punchbowl, and as chaplain of the USS AUGUSTA preaching to President Truman en route to the 1945 Potsdam Conference. But, like most of us, Ken never did anything earthshaking. However, in conversing with Ken and his wife Ruth, I repeatedly thought to myself that I would do well to emulate this man: a good person and faithful if unsung priest through whom God had transformed many lives. Who is the unknown saint on whom you pattern spiritual journey?


In 1984, I conducted the committal service for Seaman 2nd Class Donald Hugh Millikin. He was the second of the ARIZONA crew members who survived the December seventh attack who, when he died, wished to be interred with his shipmates. A National Park Service employee and I took a small boat to the ARIZONA when it was closed to visitors, positioned ourselves above the Number 4 turret, and the Park Service employee dropped the urn containing Donald’s ashes into the turret at the correct moment as I read the committal service.


This Memorial beautifully represents history and faith intersecting. When we respond to God’s call, we become part of God creating a new heaven and a new earth. Joining with God and the company of saints, apparent defeats – death on a cross, efforts to bend the arc of history away from freedom and justice, or the closing of a once thriving parish – are nothing more than the birth pangs of that new creation. Doing God’s work, not seeking fame or fortune, is our calling.


May this Memorial help us to honor the unsung heroes of the USS ARIZONA and St George’s Church; may we tell their stories and emulate their examples; and may we, like them, be part of the great company of saints on earth and in heaven. Amen.


(I preached this sermon at the Dedication of the USS ARIZONA Memorial, seen in the attached photo, in St. Andrew’s Cathedral, Honolulu, HI, December 10, 2017.)
Moral exemplar