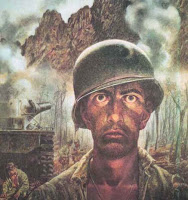 The diagnosis of post-traumatic stress disease (PTSD) in the military began with pre-twentieth century militaries executing soldiers who suffered from PTSD as deserters. In World War I, the terminology gradually shifted to “shell shock.” In World War II, Sir Charles Moran, Winston Churchill’s military physician proposed individuals had a supply of courage that, once exhausted, left a soldier psychologically incapacitated. By the end of WWII, the U.S. Army concluded:

The army’s experience with psychoneurosis during the war had led it to two sobering conclusions. The first was that even the most psychologically healthy men would almost inevitably break down after long-term exposure to the horrors of modern battle. An investigation by the army’s surgeon general’s office in 1945 concluded that six months of continuous fighting was the maximum that even the “sturdiest and most stable soldier” could endure without breaking. That is, the process of psychological breakdown was actually a normal response to the highly abnormal conditions of combat. The report quoted one damaged soldier who pithily explained, “It finally got me, the noise and all. Never used to bother me, but I’ve been slipping for a month. I guess I’m through.”[1]

Are persons, now entering their sixth month of lockdown, with its disruption of normal human interaction, beginning to suffer from Covid-19 exhaustion? Admittedly, the analogy with PTSD is imperfect. The degree of suffering and dysfunction introduced by the pandemic will rarely reach the level of combat related PTSD. Yet many people are wearying of forced isolation, tired of having to hide behind a mask, and frustrated by their diminished ability to communicate with another person when both are wearing masks. Worries about the health of loved ones and financial insecurities and anxieties compound their weariness.

Oriental refinement, has it divined what emotional stimulants can conquer, at any rate for a time, the deep depression, the leaden fatigue, the black melancholy of physiological cripples - for, speaking generally, all religions are mainly concerned with fighting a certain fatigue and heaviness that has infected everything.[2]

What help can religion offer to those who struggle with pandemic fatigue?

First, religion encourages a person to the plumb the depths of their existence, confident that in becoming more self-aware the person will also discover God (the energy, light, love, etc., which permeates all existence). Relationship with the eternal infuses a person with renewed courage, strength, and hope. Methods for plumbing the depths are variously described in terms of meditation or prayer.

Fourth, religion teaches that nobody is in complete control of their life. Accepting one’s lack of control is essential for avoiding a psychological collapse from failed attempts to control events inherently beyond one’s control. Acceptance connotes acknowledging one’s powerlessness over such events as well as developing a peaceful, joyful equanimity through meditation and prayer, contemplating beauty, and living as the beloved and the lover.

Finally, religion offers hope, declaring that the pandemic – like everything else – is not everlasting. That claim may seem to have more of a foundation in science than in religion, but religion emphasizes the transitoriness of all things (pandemics included!) and the belief that good, not evil, eventually triumphs.

Carpe diem! Seize the pandemic day confident that you can develop the interior resources to avoid succumbing to Covid-19 battle fatigue. Find time to plumb the depths, appreciate beauty, and discover the mystery who loves, liberates, and gives life abundant.

[2] Immanuel Kant, On the Genealogy of Morals, tr. Horace B. Samuel, reformatted and modified by Bill Chapko, Kindle Loc. 19250-55.

Unknown said…
Thank you for the perspective. It's good to hear your cogent thoughts once again being shared with those of us who respect and cherish what you have to offer. Your friend, Marty.
August 18, 2020 at 11:18 AM